With the ivs® televoting system, you can convert a traditional presentation into an interactive presentation and gain participation but above all the attention of your audience. In this way, there is better contact between the presenter and the audience. Participants in a meeting can answer the questions presented and the presenter can respond to these comments. Rather than listening passively to the presenter, the viewer turns into an active participant. In addition, the Wireless Interactive voting system will allow you to gather amazing results in real time. The answers can be unlimited, from the simple yes / no, to the typical parliamentary vote as well as the selection or scoring from a set of options. The system is typically used for quizzes, research among employees, research between clients or groups participating in a meeting, political congress, scientific research and any other functions where your collective intelligence should be recorded with such a simple and as clear way. 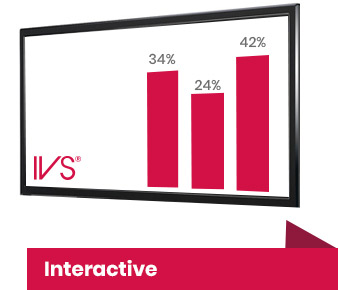 With this feature there is better contact between the presenter and the listeners. The participant in a meeting can answer the questions asked by the speaker and the speaker can respond or comment on the result. This creates a lasting, quick and intelligent communication of the speaker with his audience. Instead of monitoring in a passive way, the listeners are converted into active participants.

IVS® is a set of numeric keyboards and a central unit (a transceiver) that communicate with radio frequency. Broadcasting may be anonymous or nominal. Numeric keyboards send their information to the central unit. The central unit collects the information and sends it to the computer. The computer software saves all data and instantly converts to an easily interpretable result with diagrams. The presentation of the results can be done by any means of projection (eg projectors, plasma screens etc.).

A complete set of IVS® consists of the following:

IVS® supports all kinds of group communication. The size of the group can vary from 5 to more than 4,000 people. Each participant in the conferences, training courses, lectures or seminars is given a numerical control. The speaker or teacher puts the questions to the whole group. These questions and possible answers are entered into the system in advance. Once the vote begins, each participant can answer the questions separately by selecting a response to the numeric control. The set of these answers is saved, processed and displayed in seconds within an easy-to-interpret result with charts after the vote has been closed. 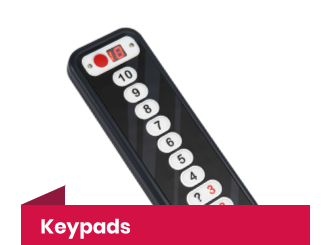 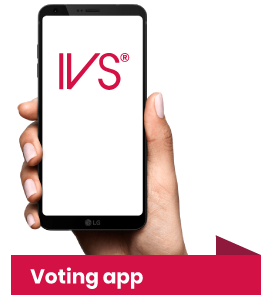 Next to each answer there is a number (1, 2, 3 and so on). Thus, the listener can easily press the correct key based on the answer he sees fit, once the keys on the controller are numbered in the same way. For each question there is a predetermined time within which the listener can choose the right answer. Usually the speaker answers the question, the possible answers, and perhaps gives some explanations for understanding the question or the logic that he asks the audience to answer. Then it signals the technician to start the time. The time the audience has for the selection can be agreed in advance but also changed before the session starts. In 95% of the speeches made in this way, the time given is 12 “. Time can also be 60”, for example, and there is no question and possible answers, etc. As time passes, red in the example) bar gradually decreases. As soon as the time has elapsed, the results are shown in bar graph format with the percentages at the top of each bar. After commenting on the results (if any) we proceed to the next question.

A nominal vote is used when a speaker wants to know exactly what each participant / person has voted for.  This can be done for educational purposes, for fun or both.

In nominal televoting, the participant (person or group) gets a controller that adapts a card. The card is matched to the participant’s name. Thus we can see, as in the anonymous, the overall response of the audience in percentages, but we can, at intervals or at the end, know who is the best. In the event of a tie, the system gets the better as quickly as possible, that is, the one who took the least time to take his decisions (to one-half of a second).

Also, in nominal televoting, we can divide the participants into groups. The scores of each group are equal to the sum of the successful answers given by the participants belonging to it. In this way, apart from the first participant, we will also have the winner at group level. In a way we will have … championship team and first scorer. If the strength of the teams is not the same then the score is based on this condition. In this case, the team with the most correct answers to the absolute sum will not be preceded, but the one that has the most proportionately correct answers.